Back when I was living in Mexico, it was really common that a few times during the week I just walked a few streets and I was able to eat at my favorite taqueria (taco place). That is with no doubt one of the things I miss the most from Mexico.

Mexican cuisine is famous all over the world, but if you ask any foreigner to name a Mexican dish, in 99% of the cases the answer will be tacos.

Tacos are famous all over the world, mainly because of their simplicity – basically, you just need a tortilla and you can put inside whatever you want. You can make tacos of chicken, meat, shrimp, beans, potatoes, etc. Some of my cousins even made spaghetti’s tacos.

Recently, Netflix published a show dedicated to this Mexican dish, this show is called ‘Taco Chronicles’ – Spoiler alert: do not watch this show unless you want to get really hungry! I was crying when I was watching it.

When I moved from Mexico to Poland, my first concern apart from not speaking Polish, or the intense and cold Polish winter, was to know that I wouldn’t be able to walk a few steps from my home and get those delicious tacos! This is no joke, the food is the top thing Mexican people miss when moving abroad.

My First Encounter with Pierogi

During my first days in Poland, I was exploring different parts of Warsaw, like: the Old Town, Łazienki Park, Wilanów Palace and more. And in almost all of the Polish restaurants I entered, in the menu there was always a dish called Pierogi. However, I was not sure if they would be good or not, so I decided to order a different thing on that day.

A few days later, I had to visit the family of my wife in Łódź, we sat at the table and there were a few dishes like barszcz, śledź, ogórki, potatoes, but also some small dumplings. I never saw them live, and I asked: “What is this?”, and they told me: “They are called pierogi”, on that moment I thought: “Oh! This is the thing that appeared in all those menus in Warsaw”. I decided to take a few of them, and when I tried them, I knew at that moment I found my favorite food after tacos!

I couldn’t stop eating them, I remember I ate like 12 of those dumplings, I couldn’t move after that but I had no regrets! After that, my wife told me that pierogi is one of the most famous and popular dishes of Polish cuisine.

Let’s start with something that many people don’t know! The word pierogi is the plural of the word pieróg, so if you want to refer to only one of those dumplings you should say in Polish: pieróg.

Honestly, I learned this after a few years of living in Poland, it’s still a bad habit I have but if I see one or ten of those dumplings I will always say pierogi. For me, the sound of the word pierogi is much better, and it just comes naturally.

Pierogi are small filled dumplings made from noodle flour dough or pastry dough. Just as the Mexican tacos, those pierogi could be filled with anything you want! But, the traditional pierogi are filled with meat, cabbage, mushrooms, cheese or fruit.

If you want to say in a cute way the word pierogi you can say: pierożki, which is the diminutive form of the original word.

What Is the History of This Polish Dish?

It’s important to mention that it is not clear who was the creator of pierogi, some people believe that:

The third theory is the most popular one, there are even two small legends that ‘confirm’ this.

One thing is for sure, pierogi arrived to Poland in the 13th century!

Legends of the First Pierogi in Poland

As I mentioned before, it is believed that the priest Hyacinth was the one responsible for bringing pierogi to Poland. The two legends that are known are:

No matter which of those theories are right, Hyacinth became the Patron Saint of Pierogi!

When Do Poles Eat Pierogi?

In the past, pierogi were prepared only on specific dates during the year, for example, Christmas, Easter or at Polish weddings. For each of those special occasions, a different type of pierogi was prepared. 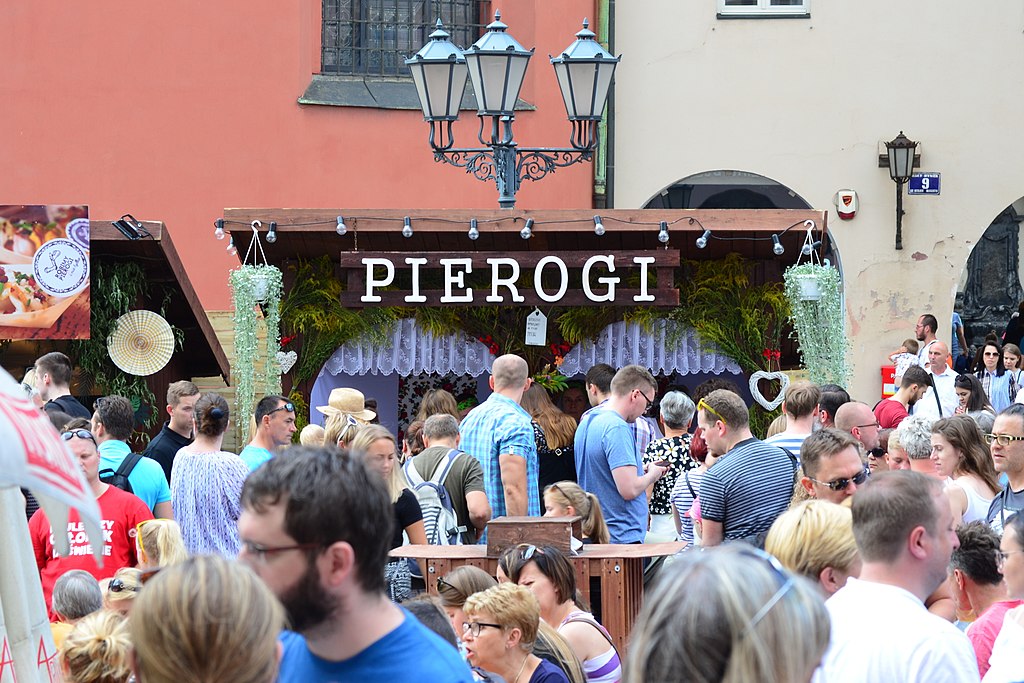 During Christmas Eve in Poland (as people don’t eat meat), the pierogi you can find on the table are filled with cabbage or mushrooms!

Nowadays, Poles prepare pierogi no matter which day it is, but it’s still a tradition than on special occasions pierogi will always be there!

Why Are Pierogi so Famous?

Well, this is not hard to answer. Pierogi had become the national dish of Poland! This dish is eaten all over Poland, no matter in which region you are you will always find places where you can eat those.

In a short explanation, pierogi is GBC – Good, Beautiful and Cheap

In many Polish families, pierogi is a recurrent dish so it’s always seen like homemade food, which is always a good idea!

Pierogi is famous as well because of their simplicity, they are not that hard to prepare, and usually, you will not make only one pieróg, but rather a bunch of them. If you don’t eat all of them you can freeze them, and the next day you can eat them and they will not lose their flavor.

Pierogi has become as well one of the most Polish elements in memes for example. The creativity of people is incredible when talking about Pierogi! I even created a weekly show called Pierogi News.

Although some Poles complain a little bit that pierogi receive more attention than other traditional Polish dishes… but I believe the kingdom of pierogi will continue for decades!
Each year in Kraków, there is a Pierogi festival which is the biggest festival in Poland dedicated to this food! You can try endless combinations of pierogi!

Also, in case you didn’t know, the International Pierogi Day is on October 8th – How cool is that!?

As I mentioned, Poles prepare different types of Pierogi, the most traditional ones are:

As you can see there are many types of pierogi, you should try all of them and decide which are your favorite ones, for me, Pierogi with meat are the champions!

What Is the Right Way to Eat Pierogi?

Well, there is no such thing as having the right way to eat pierogi, as they can be eaten warm, cold, baked, fried or boiled.

But it is common that when you go to a Polish restaurant, you will see that normally pierogi can be served in two different forms:

In my opinion, pierogi smażone are ten times more delicious! 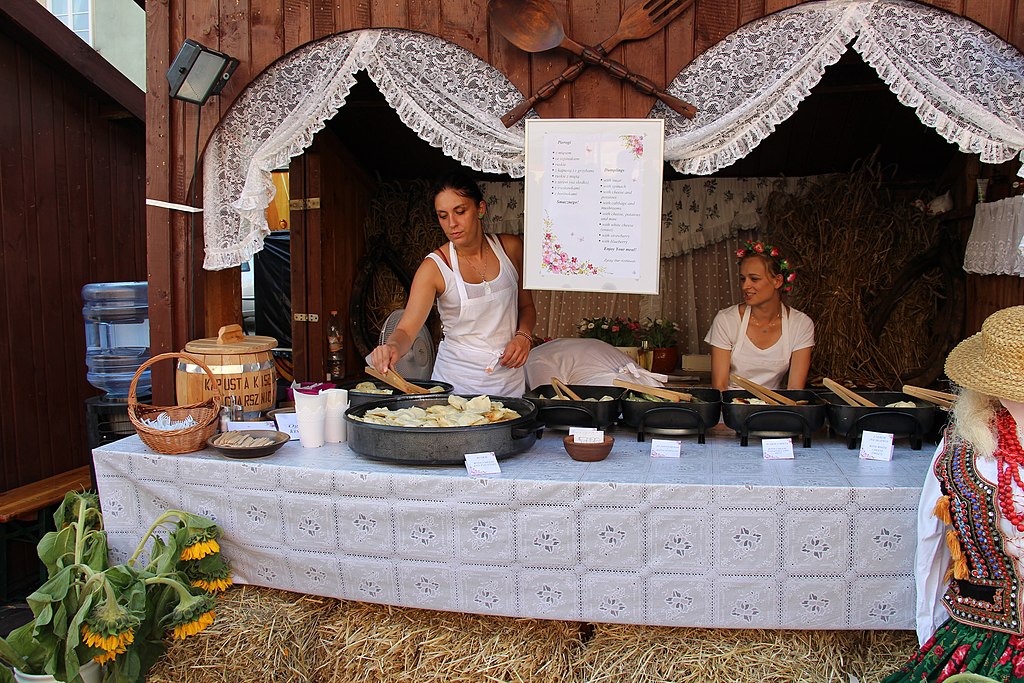 Depending on which type of pierogi you’ve ordered you can add some toppings like sour cream, sweet cream, bacon, fried onions, butter and many more!

Where Can You Get Pierogi?

No matter where you are in Poland, in all of the Polish restaurants you will find always pierogi, especially if you go to a milk bar (bar mleczny in Polish), you can try them without any problem.

Also, there are places called “Pierogarnia”, that serve exclusively pierogi. These places sell pierogi to wat right away or a few packages that you can take home and freeze!

If you are thinking now: “Where can I get the best pierogi?”, well, this question is not easy to answer as there are hundreds of places where you can eat delicious pierogi, but if I had to recommend an excellent place to eat those, it would be the chain of Polish restaurants called Zapiecek. They are present in almost every big city in Poland, and believe my friend, pierogi are their specialty! My favorite ones are fried pierogi with meat.

Pierogi are not expensive, it is one of the most affordable dishes you can get in a Polish restaurant. The price differs obviously whether you eat at a fancy place or in a milk bar (bar mleczny in Polish).

The normal price range in an average restaurant can be between 18 to 25 PLN for 8 or 9 pierogi, which is enough for one person. In some bar mleczny in Warsaw, you can even get a normal portion of pierogi for just 6 PLN!

How to Prepare Pierogi

Pierogi is not that hard to prepare, although you need to know what you are doing. The time to prepare around twenty pierogi is between fifteen and twenty minutes.

The most difficult part is to prepare the dough but after that, you are ready to go! Remember you can fill the pierogi with anything you want… it’s good to experiment!

I’ve made a video with my Polish Babcia explaining step by step the easiest recipe to prepare pierogi, you can see it in this post Pierogi Recipe or in the video below:

Pierogi will always be in my heart and one of my favorite foods in the world! If you haven’t tried this Polish dish yet, what are you waiting for? Go to the nearest Polish restaurant and eat a plate of these bad babies!

One more question for you: Which are your favorite Pierogi? Share your answer in the comments section below! 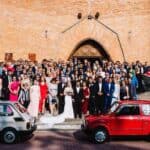 Polish Weddings – What’s the big deal about them?

How Poles Celebrate All Saints’ Day | Everything You Need to Know