Oh man! I still remember how every weekend all of my family gathered at home having dinner and we watched our favorite football teams trying to be champions. Those were good old times!

As you may know, I was born in Mexico City, and then a few years ago I decided to move to the other side of the world. In my country, we have a saying: “In Mexico, there are three sacred things: your mother, Our Lady of Guadalupe and football”. And I can assure you that this is true for most of the Mexican families.

When I moved to Poland, one of my main concerns, apart from thinking if I would survive the Polish winter, was that I couldn’t watch my favorite Mexican team playing the Mexican league. Or if the national team was playing at 8 pm Mexican time, here in Poland it would be at 3 am! I’ve tried to watch every single match since I moved to Poland, but it was super exhausting! Yeah, I know, getting older is not easy!

Before moving to Poland, I didn’t know almost anything about Polish football players, I only knew Robert Lewandowski and the guy with the easiest last name ever: Jakub Błaszczykowski. But I had no idea about any local teams or what was the name of the league. I’m still no expert but I’m doing my best.

Football (Piłka nożna in Polish) is probably the most popular sport in Poland, along with volleyball and ski-jumping.

As the FIFA U-20 World Cup 2019 will start in Poland in May 2019, it’s the perfect time to publish this post! In case you are not that familiar with football in Poland, well, I have good news for you: after reading this post you will have a general overview of how football looks in this country and of course you will learn a few Polish words in case you want to impress your friends while watching a football match!

Poland in the World Cups

Let’s start with the performance of the Polish national team in history. When I came to Poland (in 2013) these guys were not the best, many of my Polish friends were making a lot of jokes about the team, many were saying: “it is easier to have snow in July than for those guys to score a goal”.

But this was not always like that, in the 70s and 80s Polish team was a serious contender for the World Cup! In 1974 and in 1982 they finished the tournament in the 3rd place! (I wish Mexico could reach semifinals at least!) At the Olympics, they won the gold medal in 1972.

The top Polish national scorers in history are:

In the last World cup in 2018, the performance of the team was disastrous, the expectations were very high but in the end they played really bad and they didn’t make it through the group stage.

Poland hasn’t hosted many major football tournaments in its history, but this is changing fast!

In 2012, Poland hosted the Euro together with Ukraine! This was the first chance of Poland to show the world that they were ready for the challenge.

Many cities benefited from this, Poland received thousands of football fans from all over the world! In Warsaw, for example, they started to build the second metro line (it’s not finished yet though), and the construction and inauguration of the amazing National Stadium. The performance of the Polish national team was not good on that tournament, they only had 2 points and they didn’t qualify to the next stage.

The first time when I went to a stadium supporting a different country than Mexico was at the National Stadium in Warsaw! I was wearing a Polish t-shirt, a Polish flag and supporting Poland for 90 minutes! It was a great experience!

Now, in 2019 Poland will host the FIFA U-20 World Cup! Poland will be the only host of this magical event! The cities where there will be matches are Lublin, Łódź, Gdynia, Bielsko Biała, Bydgoszcz and Tychy. Surprisingly, Warsaw will not be a host of any match, why? I have no idea!

24 countries will participate in the U-20 World Cup, including Poland, Mexico, Ecuador, Colombia, Portugal, Italy and many more! The prices were ideal for everyone, 10 PLN, and 20 PLN only! For sure I will go and support Mexico during its matches.

The Ekstraklasa league is the top Polish professional football league, it has 16 teams, and there is a total of 240 matches every season!

The teams that have the most league championships are:

The top scorer in the history is Ernst Pohl (Polish) with 186 goals! And the player with most league appearances is Łukasz Surma (Polish) with 559 matches!

The champion in 2019 was the team Piast Gliwice, they won their first title in a league ever!

As I mentioned at the beginning of the post, football is the most popular sport in Poland, that’s why in all the major cities you will find at least one stadium. The top 5 stadiums with the highest capacity are:

To conclude this post, I promised you that you would learn Polish vocabulary to impress your friends when watching a football game at your favorite bar!

My Experience with the Polish Certification Exam 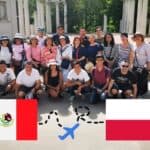 Travelling Around Poland With 15 Mexicans