Warsaw is the biggest city in Poland, and it is the third capital of this country in the history, after Krakow and Gniezno.

There almost 2 million people living in this modern city. Warsaw was rebuilt completely after the Second World War, which is something spectacular because if you visit this city you will not believe that everything you are seeing is just 72 years old.

It doesn’t matter if it’s spring, summer, winter or fall, Warsaw is a city that has everything: from extraordinary parks, modern buildings, historical monuments, to fairytale palaces and even a palm tree. All those things make Warsaw unique and beautiful place in Poland.

The Symbol of the Polish Capital

If you were walking around Warsaw it is really possible that you had noticed that in few places in Old Town or close to the Vistula River there were a few sculptures of a Mermaid. Maybe you just took a picture of that sculpture but you had no idea about the reason of why Warsaw gives importance of this mythological creature.

The reason is because the Mermaid is the official Coat of Arms of Warsaw! Do you want to know the legend about it? Keep reading my friend.

The Most Popular Legend of the Warsaw Mermaid

Long time ago there were two twin mermaid sisters swimming along the Baltic Sea till they reached Gdansk. Then they decided to split and one went to Copenhagen and the other one decided to go down the Vistula River.

The mermaid was swimming and swimming and suddenly she found a place that impressed her a lot. She fell in love with the landscapes, nature and all things about that place. Because of its beauty she decided to stay there.

Days passed and a few fishermen noticed that there was something in the river that was releasing the fish they caught which made them really upset. At first, the fishermen decided to catch the mermaid, but then they fell in love with her beauty and with her singing.

Everything was perfect until one grumpy merchant hated the singing and the presence of the mermaid. He convinced other fishermen that the mermaid stole people’s souls and that it was dangerous for the city. Therefore, the mermaid had to be caught and brought to justice.

The grumpy merchant was able to catch the mermaid. A few days passed and the mermaid was crying continuously. One day a young fisherman heard the Mermaid’s cry, he asked his friends for help and they were able to release her from the prison she was living in.

After the mermaid was rescued, she was really grateful to them. Since that moment, the mermaid promised to help the people of the city whenever it would be needed. The mermaid started to wear a sword and a shield, and she was ready to protect Warsaw and its residents.

The Importance of the Warsaw’s Mermaid

The symbol of the Mermaid is really important for Warsaw, and we can confirm this by seeing the official Coat of Arms of Warsaw. Around the city, there are approximately 10 monuments of the mermaid, with the most popular ones located in the Main Square in Old Town, at the Vistula River bank and at the top of the Palace of Culture.

If you come to Warsaw for the first time don’t forget to take a picture with this magic Mermaid! 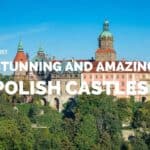 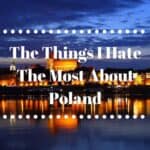 The Things I Don’t Like About Poland | Life in Poland